On this show, Lori  first welcomed Professor Hal Herzog, one of the world’s most influential Anthrozoologists. In a recent Psychology Today article, Herzog criticized much of the research about the value of using animals in the treatment of emotional, mental and physical diseases. His recent book is titled, Some We Love, Some We Hate, Some We Eat – Why it’s so hard to think straight about animals. Lori and Hal discussed how the use of animals in various therapies is very widespread, but often is based on flimsy science.

Then, Bob Ferber commented on the emotional support pig who was removed from an airliner after making a mess! Luckily, the plane had not yet taken off, but what are the limits of the Americans with Disabilities Act? 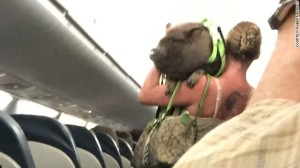 And what are the most popular dog names for 2014?