We begin the show with Laura Bevan, Southern Regional Director for the Humane Society of the United States, who provides a firsthand account of the effects of Irma and Harvey and how animal welfare groups, government agencies and individuals are working to protect and rescue animals. Florida is especially well-prepared, with an advanced plan to coordinate all the players involved in animal issues when disasters strike. Animals were moved out of some shelters ahead of Irma, but all of the wildlife centers on the Keys were destroyed.

Peter then welcomes marine wildlife photojournalist Brian Skerry. His new book, Shark, contains hundreds of incredible images of sharks up-close, accompanied by chapters on great white sharks, tiger sharks, shortfin mako sharks and oceanic whitetip sharks. Brian is a true conservationist, and the book’s final chapter is titled, The Future for Sharks – and Why it Matters.

We conclude with Dr. Robert Reed, Medical Director at VCA Rancho Mirage, who tells us about coyotes, their behaviors, and how to protect our smaller pets from becoming victims of their predation. 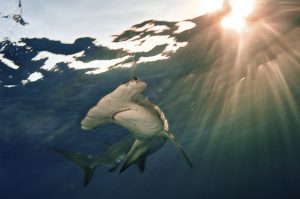 A Great Hammerhead, (Sphyrna mokarran), swims near the surface in The Bahamas near sunset. Brian Skerry. 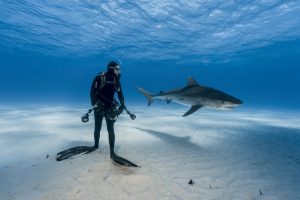 A diver keeps a close watch on a tiger shark in the Bahamas. Brian Skerry.