This show begins with Lori counting down the bite power of the ten strongest nonhuman biters, with many facts about the included animals. Featured are lions, grizzly bears, gorillas, and crocodiles.

Then Peter welcomes Dr. Naomi Rose, Marine Mammal Biologist, Animal Welfare Institute, to discuss swim with dolphin programs. A new Mexican owned facility has recently opened in Scottsdale AZ, with the usual promotional methods being employed to attract visitors. Animal Welfare Institute has new survey data showing that a growing proportion of Arizona residents do not approve of holding dolphins in captivity for the purpose of swimming with them. This represents a great positive change over the past two decades.

Peter then welcomes Pete Coppolillo, PhD., Executive Director of Working Dogs for Conservation. This organization trains detection dogs for ecological monitoring, detection of invasive species, and to support law enforcement in anti-poaching activities such as sniffing out guns and ammo in Africa. High drive, high energy dogs about one year of age are ideal candidates and only rescued dogs are trained.

The final segment begins with Koalas, in recognition of Save the Koala Month. These marsupials are not bears, but their closest relatives are wombats. Fully-grown koalas weigh about 20 lbs. and they generally live in isolation. And finally, Peter tells us about survey results on how people feel about the use of animals in scientific research, and Lori shares a sweet story about how one shelter in Arkansas is boosting adoptions. 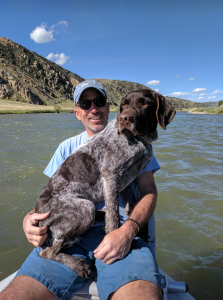 Peter Coppolillo with his dog Birch. 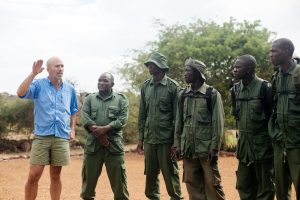