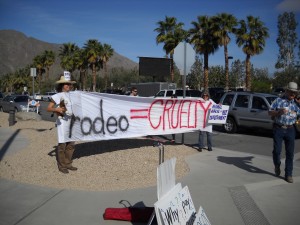 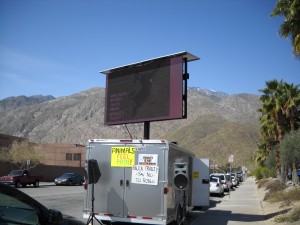 Listeners of Animals Today know that I am a fairly outspoken individual. I am passionate about animals and their welfare, I am not shy to speak my mind, and I do get worked up once in a while- especially when it comes to animal abuse and cruelty. But am I the protesting type? I don’t know. I have attended a couple protests in my life, nothing too crazy, and have never been arrested. But 2 months ago, I actually was the organizer of a protest! And what we demonstrated against was the return of the Rodeo to Palm Springs.

So, there is a company that takes its Rodeo on the road, from place to place, setting up a temporary arenas, creating space for vendors, and putting on rodeo demonstrations.

Now, why would the rodeo want to come back here to Palm Springs after being absent for almost two decades?

Well, they say – and when I say “they” I am talking about the rodeo company, the city of Palm Springs, and the sponsors and supporters of the rodeo – they say first that it would be a nice tribute to Frank Bogert. You may recognize the name, he was an actor and a professional rodeo announcer and best known as the longtime mayor of Palm Springs. A statue of Bogert on horseback stands in front of the Palm Springs City Hall and a street in Palm Springs bears his name.

Second, the promoters say, it will be bring revenue into the city for our local businesses, and we certainly need more money spent in our city.

Third, they bring up tradition– that it would be nice to bring the “tradition” of the rodeo back to Palm Springs like the good ole’ days.

And fourth, they promote the rodeo as wholesome fun for the whole family.

So, why did I organize the protest? Well, first, because I oppose any sort of activity that exploits and abuses animals for entertainment.   And the rodeo is about abusing animals. To me that is self-evident. Look at some of the videos on you tube, or on the SHARK website and tell me otherwise. Now, I know some people just do not care even if it is cruel, and I know this is a big business, and a lot of people’s paychecks come from it. But when they come to my backyard, I just need to push back a little.

Second, we protestors, wanted to educate the public who many not have thought about the cruelty inherent in the rodeo. We wanted to be out there, in public, with our signs and megaphones, to try to get even a few people to maybe look at this from a different perspective. You gotta start somewhere.

The events at the rodeo (the devices used in these events) are cruel, abusive and can often cause the animals a significant amount of fear, pain and even death. A few words about what specifically goes on, without getting too graphic: To get a horse to buck violently, flank or bucking straps are used. These are so uncomfortable to the horses that they will do anything to relieve the discomfort. That’s why they buck, not because of the rider on their back. Plus, the straps can wound and burn the skin. And the use of spurs by the rider serves to make the animal buck even more violently. In addition, bucking often causes horses to break their backs and legs, which inevitably means death. These injured animals are not nursed back to health.

Calf roping is recognized as the most inhumane rodeo event. When a running calf is lassoed, the rope around its neck becomes taut so quickly that the animal frequently becomes airborne, and then violently falls to the ground. The calf is then picked up and body slammed into the ground so the contestant can tie the legs. Injuries to the calves are common. And remember, these animals are only three to four months old.

In addition to these cruel events, even the process leading up to the rodeo events (the transport and preparation of the animals) is often very stressful for the animals.

And a few words about a new event called mutton busting. Here children ride on the backs of sheep, and hang on as long as they can, to the cheers of the crowd. It’s a junior version of bronco busting. A training ground for future participants and fans. Once in a while a child will break a bone or suffer a concussion, and once in a while there may be an injury to a sheep. But the teaching children that it is ok and even expected to have fun at the expense of the terrified sheep is a lesson that is not easily unlearned. So I hate mutton busting.

While we were on the sidewalk just across the street from the rodeo entrance, interacting with all the patrons, Andrew Stewart a CA State Humane Officer from LA County, was in the rodeo, as a humane monitor, documenting what he observed and reporting any injuries to officers from Palm Springs Police Department. Andrew is a rodeo and livestock sporting specialist. He works for ACI/Animal Cruelty Investigations, which is an SPCA that specializes in farm animal welfare and cruelty investigations.

If you would like to view his report I encourage you to visit their website at www.acinvestigations.org. I’m going to share with you some interesting aspects of his report.

With rodeo, everything is not always as it seems. Often, entertainment is used as a distraction so that the crowd does not notice the rough handling that is required to get the animals ready for the rodeo performance.

Starting with their arrival, the animals were kept in outdoor pens with no shelter from the desert sun. Is it really too much to ask that proper shelter/shading be constructed for the animals’ comfort?

The bronco events are always the most stressful on the horses. Taking otherwise docile horses and ‘making them’ broncos involves a process of poking and prodding to get the animal scared and riled up to perform. So before they even enter the chutes, Andrew watched as rodeo workers tormented a captive horse by repeatedly poking it with a metal instrument as the animal struggled to avoid its handlers. This animal ultimately collapsed in the chute, spilling out onto the arena floor as they opened the gate. This horse struggled to its feet, entangled in its ropes, it crashed to the ground repeatedly before rodeo workers were able to corral the animal and return it to the holding pens.

Mr. Stewart also observed a man as he repeatedly back-handed a horse in the face as it was confined in the chute. Scared, and extremely uncomfortable, the horse collapsed in the chute and again had to be spilled out of the gate, unable to perform.

Upon closer examination it was determined that the horse had severely cut its leg while struggling in the chute. The large gash wound was photographed and immediately reported to police on site. State law requires that not only does the animal require a veterinary examination, but the rodeo must then file an injury report with the CA State Veterinary Board. In this instance, no report was ever filed in accordance with State law.

If, as rodeo operators claim, very few animals are injured at rodeo events, it causes one to wonder if the lack of injuries is really just a lack of proper reporting. ? Leaving the rodeo to police itself is not working. Thanks to Andrew and ACI, and take a look at their website, www.acinvestigations.org.

The experience of protesting was exciting, invigorating, frustrating, tiring, and educational.

Of course we expected a lot of opposition from paying customers. Many avoided looking at us, some just shook their heads at our ignorance. A few were hostile. I was called a dumb bitch by an eight year old and told to get a job by a very angry guy. But, many people who were just driving past the event gave us positive encouragement in the form of thumbs up and shouts of “I agree with you!”

And even though the news coverage was pretty biased in favor of the rodeo, with reporters willing to accept their statements at face value instead of probing just a little “the animals are very valuable to us, we would not abuse them,” and “the Veterinarian makes sure the animals are healthy,” at least we got our viewpoint heard and maybe got a few people thinking.