Two great guests appeared on this week’s show. First, Peter interviewed Chris Butler-Stroud, Chief Executive of the Whale and Dolphin Conservation Society (WDCS). At February’s AAAS meeting, Chris led a panel discussion on rights for cetaceans. Should whales and dolphins have more rights than they do now, given their high level of intelligence, self-awareness and culutre? Listen in and see what you think. Chris was a great guest and is an important leader in the animal rights movement. Make sure to visit WDCS here.

Then Lori spoke with Deputuy Carlos Mendoza from Jurupa Valley, California. Mendoza and his law enforcement colleagues recently conducted a bust of a cockfighting ring. Yes, people are still fighting roosters to the death. Associated activities include gambling, firearms and drugs. Learn how it went down and what to look out for. And, the news with Peter. 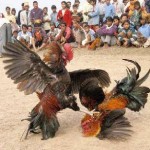