Three guests appeared on this show:

First, Joe Miele, President of Committee to Abolish Sport Hunting. Joe offered his opinions on the recent killing of a 510 lb. bear in North Carolina by hunting celebrity, Eva Shockey.

Then, Attorney Bob Ferber explained the significance of changes in the FBI’s crime reporting registry, which will now specifically record and track animal cruelty convictions nationwide.

After that, Janis Bradley with the National Canine Research Council described videos her organization co-produced designed to teach law enforcement how to read the body language of and interact with the dogs encountered in the field. One goal is to decrease the incidence of innocent dogs being shot by officers.

Finally, Peter had some hot news items including a legal challenge to Idaho’s “Ag Gag” law, a hunter kills a dog who scared away some deer, Seattle’s Woodland Park Zoo will close its elephant program, and more. 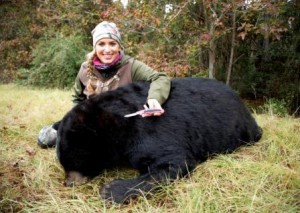