This show began with Joe Meile from Committee to Abolish Sport Hunting (C.A.S.H.). Following allegations of a connection between actor Matthew McConaughey and a canned hunting ranch, we wanted to learn more about how these operations operate. Joe is one of the country’s leading opponents of hunting and provided the disturbing details.

Then, NYS assemblywoman Linda Rosenthal described efforts she is leading to pass a statewide ban on cat declawing. Rosenthal is one of the country’s most effective and passionate legislators on animal welfare issues. Read more here.
Finally, direct from Namibia, Julian Fennessy from Giraffe Conservation Foundation talked about giraffe conservation efforts across the African Continent. Their numbers are much smaller than many would believe, and giraffe are legally hunted and subject to poaching for their meat. 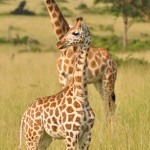