This show began with Peter recounting of the horrific death of Eight Belles at the 2008 Kentucky Derby, who collapsed on the track with two broken legs and was euthanized right there.

From birth to death racehorses almost never enjoy good, happy, pain-free lives.  Lori’s guest was Jo Anne Normile, Co-founder and President of Saving Baby Equine Charity, which is dedicated to helping horses, ponies, mules and donkeys from slaughter, abuse and neglect. Normile is a strong voice against horse racing, and after describing her reaction to Eight Belles’ death,  explained the huge extent of the cruelty, typically hidden from view of the unknowing public, that always goes along with racing.

Jo Anne’s new book, Saving Baby: How One Woman’s Love for a Racehorse Led to Her Redemption, is very compelling because it recounts her years working in the industry before she saw the light, and became an advocate for all equines. 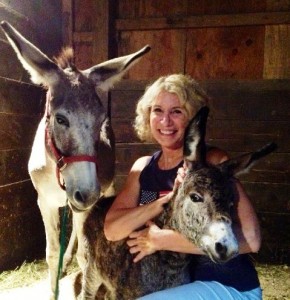