You are here: Home / 2015 Show Archive / Animals Today June 28, 2015: Is horse urine in your pills? Getting animals out of war zones. Commentary: Animal cruelty and its causes.

The first guest of this hour was Susan Wagner, President of Equine Advocates. The urine of pregnant mares is used to produce estrogen and hormone-replacement drugs such as Premarin, PremPro and PremPhase – and now DUAVEE, a “PremPro-Lite” which contains Premarin. Susan explained the history of these drugs, how harmful they are to the people who take them, and the incredible cruelty inflicted upon the horses who are factories for their ingredients.

Then, Lori welcome back Dori Scofield, VP of Guardians of Rescue, who told us about their work to rescue dogs in war zones in Afghanistan and transport them to safety. They call the program No Buddy Left Behind. To wrap up the hour, Lori shared her thoughts on animal cruelty, focusing on its causes. 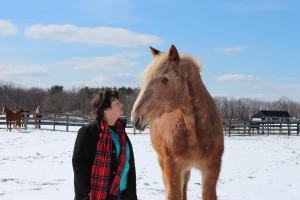 Photo of Susan Wagner, President of Equine Advocates with Mariclare, a former PMU mare rescued by Equine Advocates, along with 45 other mares from a PMU factory farm in Manitoba, Canada. Most of those mares were pregnant at the time of their rescue. Now PMU production has moved almost entirely from Canada to China, a fact of which most women, their doctors and the American public, in general, are not yet aware.