You are here: Home / 2015 Show Archive / Animals Today – September 26, 2015: Big Greyhound rescue – do you want to adopt one? Ending bear bile farming in Asia. Texas is 10th state to say no to shark fin soup. What vaccines do cats really need?

This week’s show kicks off with a great story of saving greyhounds from the Mexican racing industry. A number of American greyhound rescue organizations have recently rescued “pulled” 50 dogs from certain death from a Tijuana dog track. Darren Rigg, President of Greyhound Adoption Center joins Lori to discuss  how these dogs are doing, the cruelty of dog racing, and the joys of having one or more of these docile creatures as part of your family.

Then, Jill Robinson, Founder of Animals Asia joins Peter to announce an agreement with Vietnam officials to end the cruel practice of bear bile farming by 2020. Plus, a new group of seven captive bears has just been turned over by their owner, and they will soon be enjoying sanctuary living and much needed veterinary care.

Then, we are joined by Andrew Harmon, Communications Director, WildAid, who tells us about the importance of sharks in the ecosystem and the extreme harm and cruelty caused by the practice of shark “finning.” There is a worldwide movement to end the consumption of shark fin soup, and Texas has just banned commercial trade of shark fins.

Finally, for our cat lovers, Robert Reed, DVM, Medical Director of VCA Rancho Mirage Animal Hospital, tells us what vaccines are really needed and why for our feline companions. 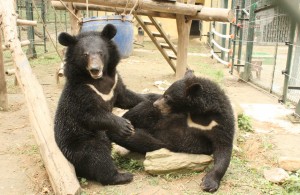