The show wraps up with another good friend of the show, Veterinarian Robert Reed who shares his expertise on keeping our companion animals safe during the holidays. Most of the discussion centers on ingestions, so take care and watch your pooches carefully.

On a related topic: Recently we thought we saw our one year old 50 lb mixed breed, Skye, eat part of a cat toy. We were very worried about her so decided to have our Vet check her out, and this X-ray was obtained: 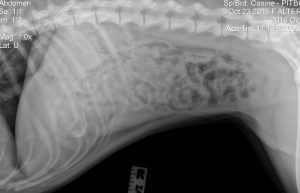 Do you see the curved white streak on the lower left of the image? Well, since she had no symptoms, we decided to watch her carefully. And wouldn’t you know it, the next night, she awoke from sleep and vomited this: 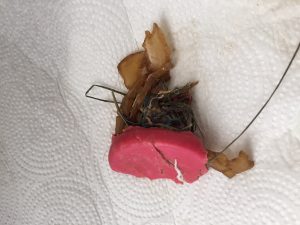 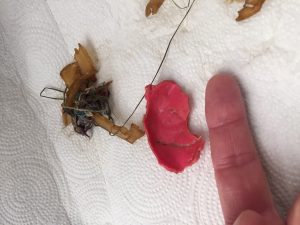 Skye’s vomit with Peter’s finger to show the size of the objects.

The red object is the hard plastic, source unknown. The tan pieces are also plastic. No evidence of the missing cat toy. Obviously we are watching her much more carefully these days.