We begin with Peter and Lori sharing some of the most important recent animal news stories, including the introduction of the California Cruelty Free Cosmetics Act, drug users are abusing animals to obtain their medications, wild animals are going to be banned in UK traveling circuses, and the success of wildlife bridges and underpasses in Colorado.

Peter then speaks with Nicole Rivard, correspondent with Friends of Animals. This Connecticut based organization conducted a demonstration opposing the importation of African animal trophies into the US in front of Eric Trump’s Manhattan apartment building.

Friends of Animals has drafted legislation in New York called Save Africa’s Big 5, which would ban the importation, possession, sale or transportation of the African elephant, lion, leopard and black and white rhino trophies.

Then, Dr. Robert Reed, Medical Director of VCA Rancho Mirage Animal Hospital, returns to talk about the risks snakes pose to our pets, particularly rattlesnakes. Rattlesnake avoidance training classes are becoming increasingly available. But should a bite occur, quickly transport your dog to an emergency facility, preferably one which stocks antivenom. It’s helpful to capture and bring the snake so the treating Vet can identify it. Reed also describes rattlesnake vaccines, so discuss that with your Dr. if you are wondering if that might be appropriate for your dogs.

Then, it’s time to talk about butterflies, because Learn about Butterflies Day is March 14. Lori provides many fascinating facts about these varied creatures. And Peter presents a nice story of a firefighter saving a dog using mouth to snout CPR. 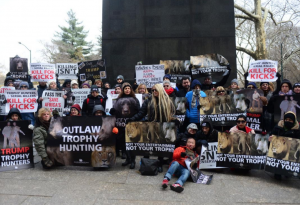